All Students of all belts are welcome! Our events allow for all to come together to train hard, learn, and make new friends. 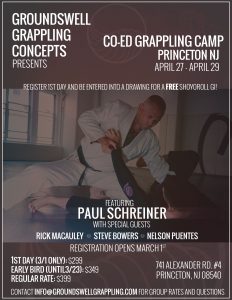 A staple at the legendary Marcelo Garcia Academy in NYC and renowned DVD personality, Paul carries the reputation of being one of the most articulate, technical, and methodical instructors in Brazilian Jiu Jitsu.

Participants will be instructed by Paul Schreiner; special guests Steve Bowers, Rick Macauley, and Nelson Puentes; and hosts Valerie Worthington and Emily Kwok over two and a half days. THIS IS A CO-ED EVENT.

About your guest instructors:

Paul Schreiner – Paul Schreiner started training jiu-jitsu in 1997 with Claudio Franca and Garth Taylor in Santa Cruz, CA, earning his black belt in 2007. Training and competing extensively in Brazil deepened his passion and understanding of jiu jitsu and provided exposure to some of the best teachers and competitors in the art. Competitive highlights include multiple US Open Champion, 3rd place at the 2006 Mundial (the last world championship held in Brazil), 2nd place at the 2012 Masters World Championship, ADCC trials finalist, New York Open champion, and gold medalist at multiple regional tournaments.

Steve Bowers – Steve co-owns Main Line United BJJ in Ardmore, PA, and is a 3rd degree black belt. After graduating college, he found Brazilian Jiu-Jitsu while in law school in Boston and was immediately hooked. He received his black belt from Jared Weiner in July of 2008.  He is also a certified Girls on Guard instructor and a knowledgeable referee.

Rick Macauley – Rick is a 3rd degree Black Belt in Brazilian Jiu Jitsu, with years of striking and MMA training. A true OG in the East Coast BJJ community, Rick dominated the competition scene with his fluidity and deadly leg attack strategy. He is currently an instructor out of Hart BJJ in Conshohocken, PA.

Nelson Puentes – Nelson began his journey into Brazilian Jiu Jitsu in 2007. He has the experience of over 100 tournament matches under his belt and  is a multiple time Grapplers Quest and NAGA champion, a bronze medalist at the Pan Americans, a NY Open champion, and a Boston Open champion. He and his wife Hillary Witt are also co-owners of Inverted Gear.

REGISTRATION WILL BEGIN ON THURSDAY MARCH 1 @ 9:00am EST.

Register on the 1st day to be entered into a drawing for a FREE SHOYOROLL GI!

If you have a group of 5 or more, please contact us at info@groundswellgrappling.princetonbjj.com or Facebook message us directly for a special discount.